https://www.youtube.com/watch?v=aMsYMb_ORL0
Posted by Ravinder Kumar at Thursday, November 26, 2015 No comments:

ARE ANTIBIOTICS AIDING OR KILLING LIFE?

Rampant use of antibiotics has become an incurable disease in itself

Think of antibiotics and picture of such medicines gives us the illusion of health – bringing to us magical curable effects for our body and health . It is a common belief that by simply consuming antibiotics, we will get rid of infectious diseases that torment us. They will protect us even if the disease is present in epidemic form, and is threatening to wipe out the entire population. However, the antibiotics we are talking about are far more harmful today, than beneficial to humankind.
Since their chance discovery by Nobel Prize winning Scottish scientist Alexander Fleming in 1928, antibiotics have covered a long distance. Today we have thousand of antibiotics on the store shelves of pharmacies – both natural and artificial – that have been developed by laboratories around the world. For decades they have been used for the treatment of scores of diseases that once were thought to be incurable, but now have become manageable with the advent of antibiotics. That being said, the other side of the coin is however, not that bright. In our eagerness to beat diseases and epidemics, we have become so used to  antibiotics that now our whole existence has come to depend on them. Use of antibiotics has brought about immunity issues and overuse is  becoming  an incurable disease and the humankind is unable to come out of the stranglehold of antibiotics.
“Why have you not completed the course of antibiotics? I had told you that you would need to take these medicines for at least ten days. If you don’t complete the antibiotics course, you know, then these medicines will not kill all the germs present in your body.” This is a typical conversation between a doctor and his patient at a government hospital in Delhi. We ourselves have become a part of such conversations when we are afflicted by some disease. Doctors invariably suggest us to complete antibiotics course with full caution and adequate redundancy, so that we heal even if we forget a dose or two. We faithfully obey doctor’s command without questioning the extra dose and unmindful of how taking antibiotics for longer period of time diminishes our immunity power against diseases and, in the process, makes our body hollow from inside.
According to child specialist Dr. PK Purthy of Delhi’s Sir Gangaram Hospital, now children taking birth in India have become so immune to antibiotics that only a few antibiotics are effective on them. This trend is recent and has begun since the last five years, but it points towards an alarming future. For India, this trend is particularly dangerous because infant mortality rates are already high in the country and it is poised to grow higher in future if antibiotics become ineffective on children, as pointed out by Dr. PK Purthy.
According to Dr. PK Purthy, there was no big social or economical reason behind falling infant death rate in India. If infant death rate came down in previous few years then its reason was wide dependence on antibiotic medicines used in controlling infectious and bacterial diseases among new born babies. If, for some reasons, these antibiotic medicines are rendered ineffective, then death rate of new born babies will grow gain. Not only kids, there is big risk of spread of bacterial infections among grownups and old age people.
The Tuberculosis immunity
Senior Resident of Majeedia Hamdard and pathologist at Ram Swarup TB Hospital at Delhi’s Mehrauli area, Dr. Hamid Majid says that the biggest danger is of the diminishing effectiveness or efficacy of antibiotics used in treatment of tuberculosis (TB). Doctors have time and again warned that if these drugs completely lose their power to kill TB causing bacteria, then India will again plunge in that age of history when TB was an incurable disease in the country. If this happens it  won’t take long before someone who catches TB will have no option but to spit bloody sputum for many months and wait for his or her imminent death.
Antibiotics are an indispensable part of modern medical system. But with the speed they are losing their efficacy in fighting diseases, indicates a bleak future with frightening consequences. This issue is being debated at international levels. What is most unfortunate is that it is directly linked to a profit-oriented society. For the full story Read Alive December 2015 issue

http://www.caravanalive.com/alive-exclusive/are-antibiotics-aiding-or-killing-life-14998.html
Posted by Ravinder Kumar at Thursday, November 26, 2015 No comments: 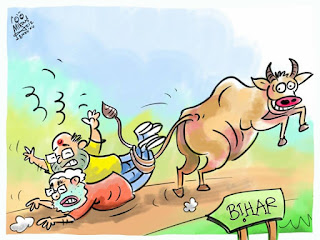 http://www.caravanalive.com/alive-exclusive/life-losing-to-death-14812.html
Posted by Ravinder Kumar at Wednesday, November 04, 2015 No comments:

http://www.caravanalive.com/top-story/aap-s-caste-card-14951.html
Posted by Ravinder Kumar at Wednesday, November 04, 2015 No comments:

Does AAP play the caste politics like most traditional Indian parties, or do they adhere to the value of a caste less color less India. Ravinder Kumar of Alive finds out
http://www.caravanalive.com/top-story/aap-s-caste-card-14951.html
Posted by Ravinder Kumar at Wednesday, November 04, 2015 No comments:

http://www.caravanalive.com/alive-exclusive/life-losing-to-death-14812.html
Posted by Ravinder Kumar at Wednesday, November 04, 2015 No comments: